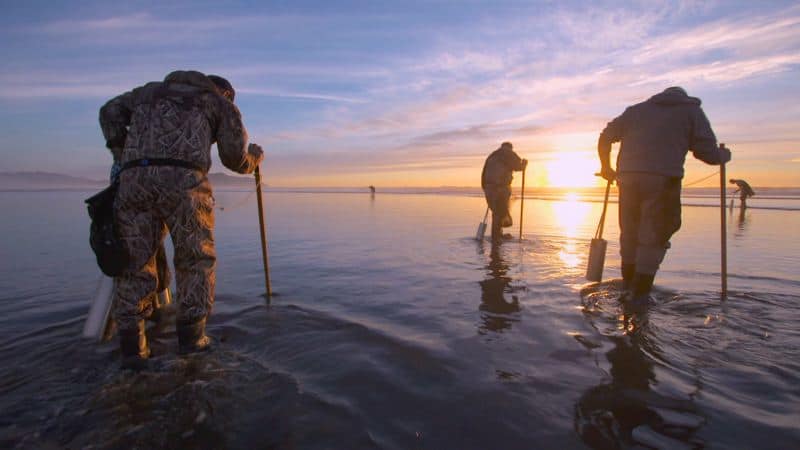 If you get a chance to visit Northern Oregon coastline, be sure to stop at Seaside beach. Oregon has the most beautiful beaches.

Learn to dig Razor Clams with a Clam Gun

Clatsop Beach near Seaside Oregon is 18 miles long and accounts for 95 percent of the harvesting of razor clams on the Oregon Coast. The best time to dig for razor clams is during a minus tide. Plan on being there 2 hours prior to the low tide which can be found on any local tidal chart. Stomping your feet or hitting the ground with a pole are ways to get the clams to produce a show. We used the stomping technique in this video. You may think you look funny doing this but the results will show for themselves. We had several families come up to us and say, “you look like you know what you’re doing, can you help us?” It’s amazing what you can learn on the internet.

The limit is 15 razor clams per day in the Washington and Oregon States. We limited out in less than 30 minutes per day during our four days in Seaside, even though we didn’t have a minus tide. We parked at the end of 12th avenue in the public parking lot near the boardwalk. It’s a short 5 minute walk to the razor clam beds. You can use a shovel but the easiest way to dig for razor clams is to use a clam gun.

The best clam gun on the market is called the Clamhawk and can be purchased at Dennis’s Company in Long Beach Washington or Englund Marine & Industrial Supply in Astoria Oregon. The Clamhawk is a 5” stainless steel clam gun and will last a lifetime. Some people remove the digger when cleaning but I prefer to keep the clam with the digger and body together. Razor clam cleaning is very easy and will take a few minutes to complete. Take your time.

How to Fry Razor Clams Perfectly

Dip the clams in the egg wash and coat them with any fish fry mix. We tried “Slap Ya Mama” and “Louisiana” fish fry. I preferred “Slap Ya Mama”. You can add extra heat by adding 1/2 teaspoon of Slap Ya Mama Hot Cajun Seasoning to any fish fry mixture. Once the oil is hot enough, fry the razor clams for about 1 1/2 minutes or until golden brown on each side.

Enjoy them with a creamy clam dip as an appetizer or on a Po’ boy bun. No matter how you eat them, you will be experiencing the best the west coast has to offer.